PKI Press was established to publish books about the state and future of the world’s information infrastructure: the Internet, phone networks, and private networks. Anyone interested in the translation of commercial, social, political, and community functions to virtual space will find indispensable information in our publications, which treat a variety of topics for both specialists and generalists. Whether you’re a security professional or an Internet user concerned about the future of your business or personal interactions online, PKI Press can provide you with the books you need to understand what is happening now and what is on the horizon.
Learn more 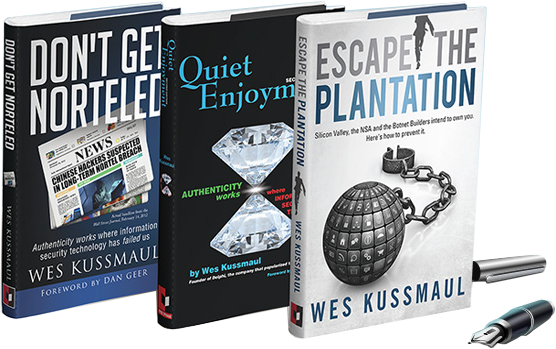 by Wes Kussmaul
Information security technology is today's bloodletting. And, like bloodletting, it just doesn't work!
The Wall Street Journal reports that the demise of multi-billion-dollar Nortel Networks was largely due to a few stolen passwords. Could the same thing happen to your company? Learn why information security technology can't prevent identity attacks – and learn what will prevent identity attacks.
Learn More 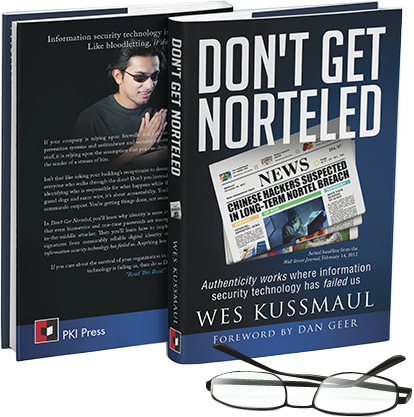 by Wes Kussmaul
Bring Security with Privacy to your Networks and your Life.
The Authenticity Economy brings new jobs and new entrepreneurial opportunities. Learn how your background of integrity will open new doors for you. Quiet Enjoyment, Second Edition.
Learn More 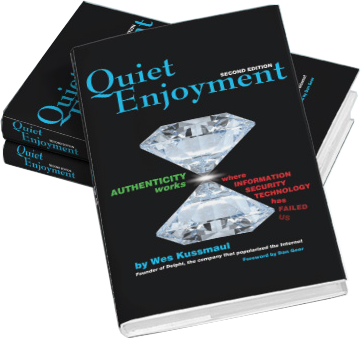 by Wes Kussmaul
Do as Dan Geer says and “Read This Book!”
The principal money-making asset of the large search, digital media and social networking companies is the information that identifies your purchase habits, relationships, and political affiliations.
Learn More 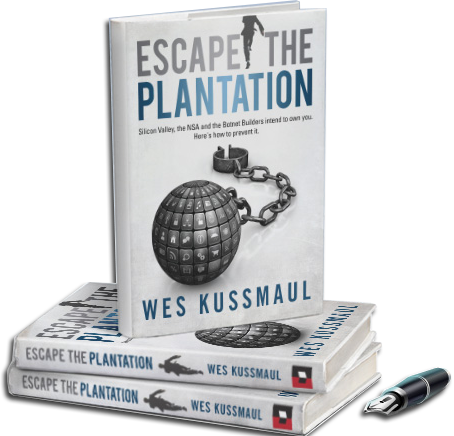 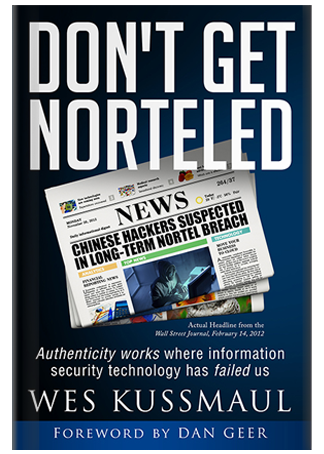 Don't Get Norteled describes how a company worth hundreds of billions of dollars was sent into quick bankruptcy after the passwords of its top seven executives were compromised. Learn the simple steps your organization could take to secure digital assets and prevent the same breaches.
Buy Book
Get a free Chapter 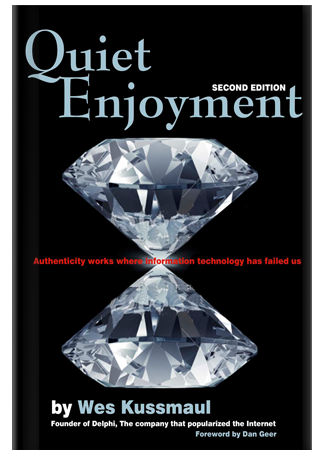 Quiet Enjoyment in the digital world is possible! Join Wes Kussmaul, founder of Delphi and one of the first people to show that the Internet had great potential, as he takes you step by step through the problems of inauthenticity, the process of creating measurably reliable identities, and how you stand to benefit by getting involved now.
Buy Book
Get a free Chapter 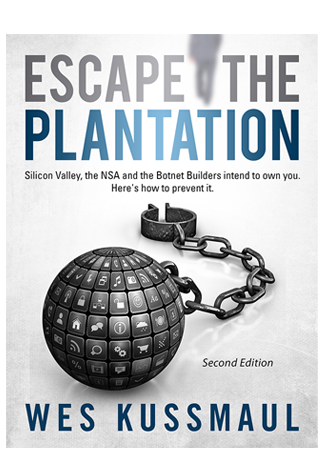 Escape The Plantation demonstrates why identity is the foundation of security, and how to protect your identity and your privacy from the worsening plagues of theft and predation on the Internet today. You have the right to and the means for anonymous accountability for yourself and your family in the digital age. This book will show you how.
Buy Book
Get a free Chapter

After the adoption of the Internet came the World Wide Web, a domain that transformed the way we live and do business. Everything from research to commerce was profoundly affected. The ability to access information quickly, to buy and sell efficiently, and to be “anywhere” without restriction or inhibition fired the imagination of millions of users.  But not all imaginations had benevolent intent, and citizens of the Web fell victim to malware, fraud, predation, phishing attacks, and theft. Ten years ago we were told that things would steadily get better, but that assessment was way off the mark. Rather than improving, individuals, associations, and businesses are increasingly at the mercy of dystopic forces.  How could the "experts" be so wrong?

PKI Press was established to publish books about the state and future of the place we spend more and more of our time: the world’s information infrastructure, i.e. the Internet, phone networks, and even our private computer networks.  Anyone who spends any time online or is interested in the translation of commercial, social, political, and community functions to virtual space will find indispensable information in our publications.  Our featured author, Wes Kussmaul, treats a variety of topics for both specialists and generalists. Whether you’re a security professional or a citizen of the digital world concerned about the future of your interactions online, PKI Press will provide you with the books you need to understand today's digital culture, and how to bring accountability AND real privacy to your online world.

Wes draws on more than three decades of experience in the development and management of secure online spaces in his writing. In 1981 Wes founded Delphi Internet Services Corporation and its Kussmaul Encyclopedia, the world’s first computerized encyclopedia, an early example of hypertext. In 1989, Delphi became the first to bring the Internet to mass audiences. Rupert Murdoch’s News Corporation acquired Delphi in 1993.

While CEO of Delphi, Mr. Kussmaul launched a spin-off company, Global Villages, Inc., to provide magazine publishers with the business planning, design, engineering, hosting, management, and promotion services that allowed them to offer online services to their subscribers and advertisers under their own name. During that time Wes realized that the unboundedness of the Web posed obstacles to the kind of secure communities and reliable identities needed by publishers and other relying parties. In order to focus on the growing issue of authenticity, Wes sold the hosting portion of Global Villages Inc. to NTT Verio.

The continuing operation, now called The Authenticity Institute, turned its attention to enrollment technologies that will enable secure and reliable online spaces governed by the principles of professional licensing, building codes, and occupancy permits.

In 2002, The Authenticity Institute became a charter signatory to the International Telecommunication Union’s World e-Trust Initiative and is now a Sector Member of the ITU. In 2007, the Secretary General of the ITU asked Wes to serve as a member of the High Level Experts Group in the ITU’s Global Cybersecurity Agenda; and as a member of that group was asked to present his QEI vision of an authenticity-infused secure Internet to a meeting of the United Nations World Summit on Information Society (WSIS).

Wes is the author of several books about privacy and authenticity, including Quiet Enjoyment (2004), Own Your Privacy (2007), The Future Needs You (2007), and Don’t Get Norteled (2014). He is also an individual adherent of the International Union of Latin Notaries and has been appointed a Notary Ambassador by the National Notary Association.

Wes received his BS in Physics from the University of Central Missouri in 1971 while serving in the US Air Force at Whiteman Air Force Base (SAC).

Want to learn more about Authenticity?